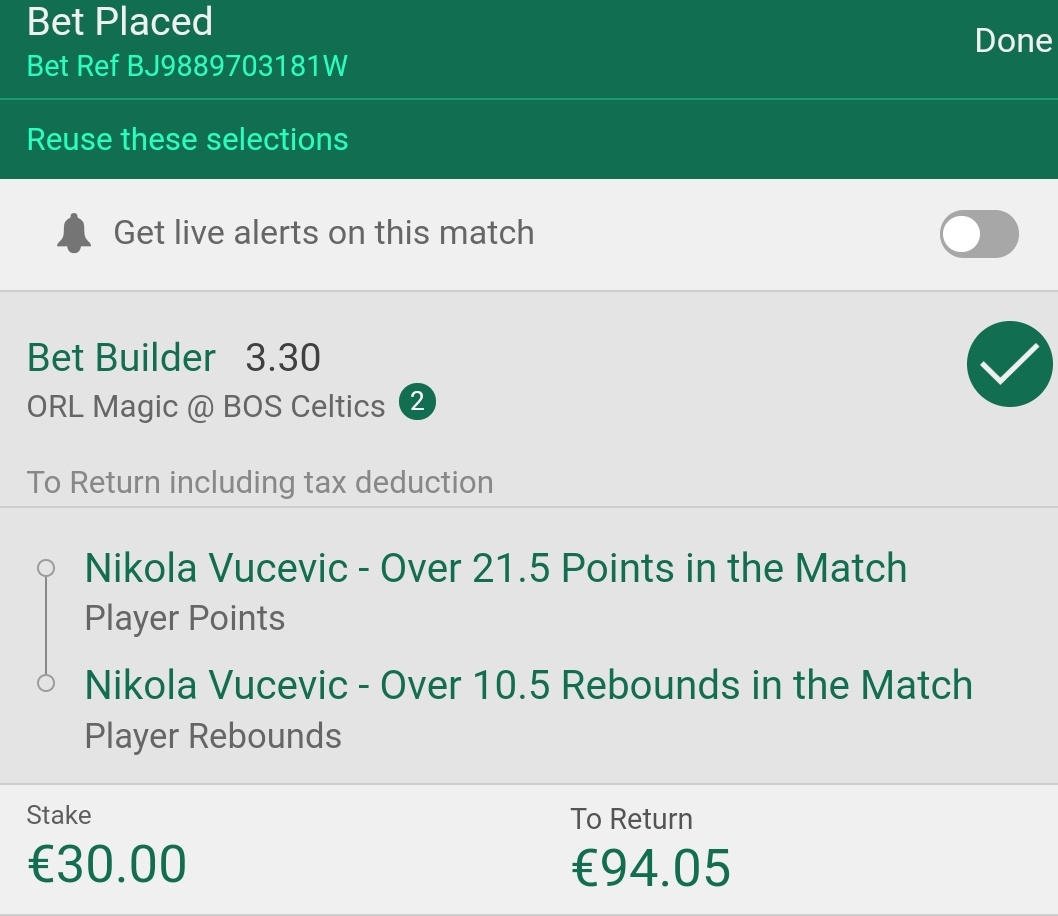 -Fultz OUT for rest of the season, Fournier not playing today again.
-Vucevic is averaging PRA of 37.3 this season- so already two points higher than the margin!
-Since Fournier went down he is averaging PRA of 39.4 with 2.5 big blowouts. Since Fultz isn't starting he is averaging PRA of 43.3;
-In those six games without Fournier he had PRAs of 46 (blowout), 47 (small BO), 37 (huge BO), 29 (Fultz started), 33 (blowout+Fultz started) and 45;
-He has huge usage rate as most of the attacks go trough him, so not only that he scores a lot but he also assists well, with 3-4 assists expected per game and it's not surprising if he ends with 5-6 assists in close games;
-Boston is without Tatum and potentially without Brown as well, so close game is expected here, and chances of blowout should be minimal;

-Since Fultz got injured and pushed Anthony to the starting line up bookies massively increased PRA line for Anthony;
-We played him every time and he was an easy win every time and never came close to the margin (first game he had PRA of 20, but the line was 25.5/26.5 and he only got to 20 because of blowout where he went and collected 3 asists and 6-7 points while Vucevic and Gordon were off the floor);
-He doesn't play huge minutes;
-100% of the time he is on the floor so is Vucevic, so his usage rate is worse than in the second unit;
-He is shooting terribly- just 31.5% this season and 18% for 3pt;
-Depending on who will be starting for Boston, Anthony could end up being guarded by Smart and that's a very hard match up. Worst case scenario Smart will be guarding him here and there if Pritchard starts;

-Cleveland is without plenty of players todayL Garland, Delladova, Porter, Sexton, Windler, Love and maybe Prince and Allen; They also traded Exum away; This leaves them with Dotson as only real PG, and besides him they only have Osman and Okoro that can drop to 1 and 2 even though neither of them can play it well; So Dotson should be playing very big minutes-even with blowout he should easily play 30+ minutes, but if the game is close (and is expected to be) he should be playing close to 40 minutes;
-In the 4 games he started he has 2/4 overs and PRa average of 21.9, but he had a 3/12 shooting game against Memphis, and a heavy BO against Utah where he didn't had Drummond to boost his assist numbers;
-What's important he is taking shots, and good number of them: 12, 17, 14 and 11 in last 4;
-He is also assisting well, when Drummondis playing and Dotson is starting he had 6, 8 and 6; Add to that 2-3 rebounds he should be getting and this should be an over;
-Drummond is also a good bet, but only if Allen isn't playing. Allen being active might negatively impact Drummond's playing time.

-Came back of injury and doesn't seem to be slowed down at all;
-In 4 games he played he had PRAs of 40 in 30 min against Detroit (PFs), 31 against Utah (Gobert, PFs in first quarter and he got injured and couldn't actually play), 42 against Spurs (38 in regular time) and 42 against Memphis (today's opponent);
-With 35-36 minutes expected to play today if the game is close he should have a good PRA, and his projected average is 42.4 so 4 points above this margin;
-If Morant plays it should be a big plaus because that would mean more running and more points, and also more chances for easy rebounds;

-He is averaging PRA of 25.2 this season while playing 31.6 minutes per game. When games are close he usually plays aroun 34-35 minutes;
-Atlanta will be without Gallinari and now also without Bogdanovic (and maybe without Rondo), so that should help Hunter play 30+ minutes again and also have a higher usage rate when he plays while Young is off the floor;
-He has 6/6 overs in the last 6 games with average PRA of 27.7;
-Overall for the whole season (so when Bogdanovic and Gallo played as well) he has 7 overs out of 10 games (4 games out of 10 were right around the margin, 2 overs and two unders);
-Scraper tells me that his line is same on other bookies, but with much worse odds- 1.65 on bf/sb and 1.57 on unibet;
-If you can get him on normal odds for PT+REB at 20.5 line, you should probably take that one as it's a better bet (but on bookies currently have him on that line odds are crap);

-He is averaging PRA of 23.3 this season;
-With Ingles being OUT he has a higher usage rate in the second unit. He is expected to score more but he also has bigger playmaking duties which should result in more assists as well;
-In the two games without Ingles, Clarkson went for PRAs of 34 against Bucks (played 1 minute less than what he would play if the game was close) and 33 against Cleveland (heavy BO, so he played 3-4 minutes less). So in the first game he played 35 minutes, while in the second game he played 28 min but would surely playing 32-33 if there wasn't for a blowout. That is almost a 40% increase in playing time, and if he gets a 40% higher PRA this will be an easy win, so even with a bad game (worse than average) he should still be a win with the increased playing time;
-Good opponent for over, poor defense high pace, both things suit Clarkson;

-16.5 on all others I saw (he is good on 16.5 as well if you take good odds- 2.05$ on unibet;
-He doesn't take plenty of shots, but the one he is taking are mostly uncontested so he has a really good 3t shot;
-He averaged PRA of 14.3 PRA last season and is seeing a good improvement this season because he is also playing more on average (currently 31.6min per game) and now he is averaging PRA of 16.9 so almost 2 points above the margin;
-Two main reasons for taking him is that Joe Ingles is OUT, which leaves O'Neal with more minutes to play: In the first game without Ingles he played 34 minutes and left 1 minute before the end, and in the second game against Cavs he played 30 minutes but left with almost 6 minutes to be played duo to a bad blowout;
-Second reason is the opponent- his matchup is bad in defense, and also slower than him, plus Atlanta overall plays not so great defense and they play with faster pace, so Utah should be scoring more points today than usual which gives O'Neal chance to get more points and assists, while higher pace gives him higher chance of getting the rebounds;

-Best bet today, unbeleiveble margin;
-Easy choice here as Dallas is without Powell, Kleber and Finney-Smith. That means WCS will be playing big minutes today- probably around 30 which is almost two times more than he plays on average;
-He is currently averaging 5.6 rebounds on 17 minutes playing time, so with 30 minutes he should easily get 7 rebounds, but he should probably end up with 10;
-He isn't part of the offense, so his only duty is to play defense and get the rebounds;
-As we expect around 30 minutes played, we can look at his seasons at Kings where he played 27 and 28 minutes on average and he was averaging 11.9 and 12.8 rebounds, both well above this margin;
-Tbh, I expected a 7.5 or 8.5 margins and I think those would still be good bets;
-Last game he got 14 rebounds against Hornets while playing 30 min;
-In the last 4 games he is starting, and has 7, 9, 6 and 14 rebounds, but have in mind that in the first 3 games Powell, Smith and Kleber played;

-Since Garland got injured (and Exum) Osman is playing huge minutes- on average 35 in those 6 games while averaging PRA of 23.3;
-What's important here is that he is taking good number of shots- the lower number of shots he took in those 6 games is 12, and we expect him to take 13-16 today. He also plays kinda as playmaker because both Sexton and Garland are OUT so he assists well (over 5 assists in last 5 games). Combined with 5-6 rebounds and he should go over as long as he isn't bricking most of his shots;
-In case Prince and Allen will play today, Cavs will have 10 players available, but 3 of those will be centers (Allen, Drummond and McGee);

-Since Fournier went down (and Fultz played just one full game after that) Gordon is playing 30.8 min on average and has average PRA of 29.8; Before that he had average PRA of 18.6 and was playing 24 min on average;
-Reason for these differences is that he started slowly and wasn't playing much duo to injury related reasons (was slowly introduced) but in the recent time he is playing 30+ minutes- last two games he played 35 and 36 and that 35 min game was a blowout where he played 3 minutes less;
-So, we are expecting him to play good minutes, well above what he was playing at start of the season or his season average of 27, and also to have a higher usage rate-more shots and also more assists as Fournier isn't playing;

-Great margin and even better odds (he is 37.5 elsewhere on lower odds);
-Is averaging PRA of 36 but today Cleveland will be without Sexton and Garland, so Drummond will be the first attacking option for the Cavs and should have a monster statline when the game is over;
-There is no clear favorite here, so the game should be somewhat close and Drummond should play a lot;
-He played against NYK this season, (both Garland and Sexton played and scored 37 points combined) and he had PRA of 37 in 33 minutes played (PF trouble);
-Allen and Prince are doubtful;

-Is huge part of offense in NY;
-He averages PRA of 40.4;
-If the game is close he should be playing huge minutes because that's what Tim asks from his starters;
-Barret who is the second attacking option will have a hard march up in offense, because most likely he will be guarded by Okoro who only plays defense.

-He averages PRA of 36 this season;
-There will be no Tatum today, and Tatum is averaging 38 and that 38 needs to go to someone and brown should be the one benefiting the most as he is already doing a huge damage in offense;

-No Tatum and few other guys;
-So one less good player to pass to, but then again-Smart should see an increase in usage rate which should lead to more assists;
Reply
Return to NBA Tipovi